recently, sep was honored the 19th global performance excellence awards (gpea) by asia pacific quality organization (apqo), which made it the only energy company to win the award this year.

in an interview with china energy news (cen) during the ciie, wang yundan shared the company's experience in implementing the "going global" and "bringing in" strategies as well as executing the belt and road initiative in recent years. 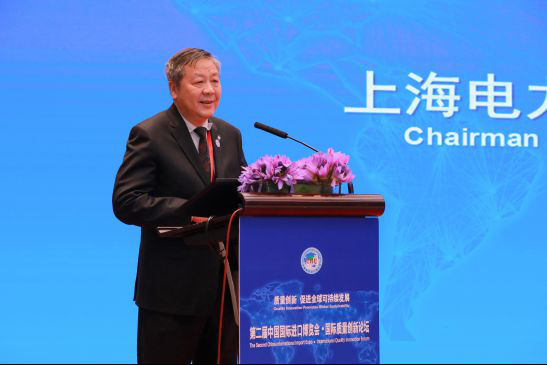 cen: what cooperation agreements were signed by sep during the first ciie in 2018? what is the progress of these projects?

regarding the equipment procurement contract, sep and ansaldo energia signed a framework of purchase for gas turbine equipment and related service agreement, marking the successful introduction of the first 750 mw gt36-s5 h-class gas turbine in china. as a supportive project, sep minhang power plant gas-steam combined cycle power generation demonstration project is the largest gas turbine project in china at present, which has completed all the approval procedures at the government level this year, and will start construction soon. in brief, the performance of this contract has been very smooth in the past year. strictly speaking, it is a project pooling the wisdom of china, italy and switzerland, and we are making concerted efforts and integrating advanced technologies, hoping to jointly build it into a digital intelligent gas turbine power plant and an international cooperation demonstration project in china and even the world.

in terms of the energy supply contracts, which have been performed well in the past year, we continued to sign a number of fuel supply contracts for our power plants this year.

cen: what do you think of the development opportunities brought along by the ciie for energy enterprises?

wang: in fact, over the past two years, it has been obvious to all of us that the ciie has established a large platform for global communication and exchanges with remarkable results. it has brought china closer to the rest of the world, and we, as an energy company, have benefited the most.

in the practice of the belt and road initiative, enterprises should not only "go global", but also "bring in". ciie has played a very active role in "bringing in", not limited to the introduction of technologies, ideas and products. meanwhile, the platform helps governments and enterprises around the world establish friendship between each other, and thus assists enterprises in "going global" better.

cen: as china is opening up wider to the world, what achievements has been made by sep in going global, bringing in and participating in the belt and road international cooperation in recent years?

wang: under the guidance of the country's belt and road initiative and spic's strategy to build a world-class clean energy group, sep has been actively developing overseas markets, and carrying out more than 40 overseas projects in over 20 countries such as malta, montenegro, japan, turkey, pakistan and spain, among which nine projects has been put into operation, involving thermal power, pv power, wind power, power generation, transmission and distribution, with the service scope covering epc, o&m, technology, consulting, etc.

in 2018, the total overseas assets of sep exceeded rmb 9.2 billion, with an installed capacity of 189.800 mw in operation and 1366.6 mw under construction, and the overseas operating revenue reached rmb 796 million.

cen: do you have any good experience in international cooperation to share with the industry peers?

wang: it can be said that the energy cooperation project between sep and malta is one of the most successful projects so far. sep, a subsidiary of spic, is the largest foreign enterprise in malta.

since sep (malta) holding ltd. (sepm) was registered at the end of 2014, we have invested 100 million euros to acquired 33.3 percent stake of enemalta, malta's only state-owned power company, and invested 150 million euros to control 90 percent stake of d3 power plant, the largest power plant in the country. in addition, we are working with the government of malta to develop a third-party renewable energy market, such as the 46 mw mozura wind power project in montenegro, which was put into operation in february 2019.

after years of hard work, the win-win outcomes have been achieved. as praised by maltese prime minister joseph muscat, the above series of cooperation projects have become "a win-win model of economic and trade cooperation between malta and china", which have also been selected as an excellent case of "going global" by sasac of the state council. meanwhile, the video of the case was released by undp on its official website.

in the first year after the equity investment in enemalta, sep managed to turn around the company from consecutive losses, and obtained investment returns in the process. in the meantime, it helped malta realize the promise of reducing the residential power tariff by 25 percent, from the ranking of top three in the eu to the second lowest, and decreased the annual power outage time from a dozen hours to less than an hour, and the line losses from 14 percent to 4.7 percent last year. combined with a series of domestic efforts in malta, and the government's finances have turned from fiscal deficit to leading the eu.

cen: what is the strategic positioning and goal of sep in "going global"?

wang: as china's economy is growing gradually and has become the second largest economy in the world, the country will need to integrate into the world step by step in the process of walking onto the center stage of the world. as a listed central soe, sep aims to create value for the shareholders, and customers, and realize our own value in the meantime.
we started from being based in shanghai to being excellent in china gradually, and are endeavoring to become strong in the world, with the goal of building a world-class clean energy enterprise with global competitiveness. in the coming years, we hope the internationalization index of sep to be greatly improved and exceed 30 percent or even higher by 2025.

cen: sep has just won the highest prize of the 19th gpea by apqo, and what is the main reason for winning such a glory?

so far, the total assets of the company exceeded rmb 100 billion, and the holding installed capacity topped 15 gw, with clean energy accounting for more than 45 percent. at the same time, the energy conservation and emission reduction technology of our coal-fired power units, the integration technology of gas turbine control digital, and the offshore wind power technology have reached the world's leading level.

in fact, we have been working on continuous improvement of management performance since 2012. especially in international project operation, we pay attention to the introduction of advanced energy technologies, high quality capital, diversified services, and win-win cooperation concept to the cooperative countries, while bringing in advanced foreign technologies, management ideas and excellent talents. we also attach great importance to cultural integration, fulfill social responsibilities, promote the economy, blend into local communities, improve the environment, and expand the employment, in order to achieve harmony and win-win, and promote long-term sustainable development in the overseas markets.