on the slopes of mount mozura in the southern port city of bar in montenegro, stood 23 chinese-made 2 mw low-speed intelligent wind turbine generators (wtgs) whirling and setting off a spectacular coastline.

here is 46 mw mozura wind park, a renewable energy project jointly constructed by sep, a subsidiary of spic, and the government of malta in a third-party market, which started construction in november 2017 and went into trial operation on april 25 this year. 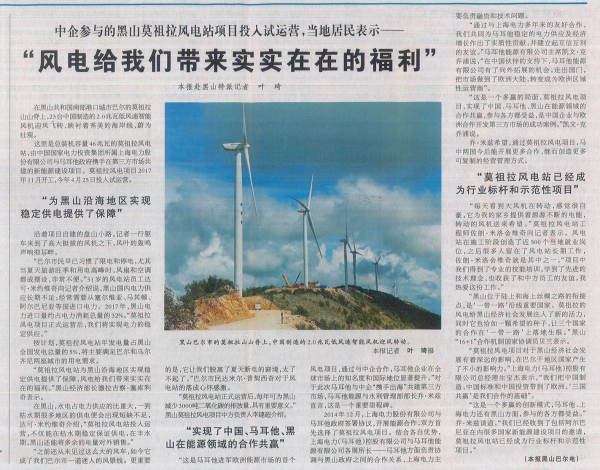 along the winding mountain path built by the project itself, the reporters drove to the bottom of wtgs, with the roar of the wind blade ringing in the ear.

"local residents in bar are used to electricity shortages. especially during the tourist season in summer with the peak demand for electricity, fans and air conditioners become nothing but an ornament, which is really inconvenient," said darko mijovic, a 51-year-old local employee at the wind park. montenegro has been confronted with long-term electricity shortages and often needs to import electricity from serbia, macedonia, albania and other countries. in 2017, the power imports accounted for about 32 percent of montenegro's total power consumption. "after the commercial operation of mozura wind power project, we will achieve a stable supply of electricity."

mozura wind park is scheduled to generate 5 percent of montenegro's total electricity annually, which will mainly meet the power demand of the cities of bar and ulcinj.

"mozura wind park provides a guarantee of stable electricity supply in the coastal area of montenegro, and wind power has brought us with tangible benefits," said montenegrin minister of economy dragica sekulic.

hydropower accounts for a large proportion of electricity supply in montenegro, and many areas are faced with power shortages during the dry season. "after commercial operation, mozura wind park will not only ensure stable power supply during the dry season, but also enable montenegro to sell its excess power during the wet season," said darko mijovic.

"i've never seen a windmill this big before. now it's a beautiful sight in our city. and more importantly, it gets us out of the summer blackouts, which is amazing," said damir pucciic, a local resident in bar who is grateful for the wind farm.

"when the mozura project is put into official operation, it will reduce 3,000 tons of carbon dioxide emissions in montenegro every year, which is of great significance," said li jianchao, the chinese leader of mozura wind power project.

"this is malta's first wind power project to enter the european energy market. through cooperation with chinese companies, maltese companies have significantly increased their visibility and international status in the global market," said joe mizzi, malta's minister for energy and water management. as for the cooperation between malta and chinese companies in the third-party market, he considered it as an important milestone.

in december 2014, sep signed an agreement with the government of malta to carry out energy cooperation, and the two sides chose mozura wind park as the first project. combined with their respective advantages, sep (malta) holding ltd. (sepm) and enemalta plc gave full play to their respective strengths, with the maltese side responsible for coordinating the cooperation with the government of montenegro, while sep side was mainly engaged in financing and technical issues.

"through years of friendly cooperation with sep, we have jointly made a substantial contribution to malta's stable electricity supply and economic growth, and established a friendship of mutual trust and mutual benefit," said enemalta's chairperson kevin chircop, "with the support of our chinese partners, enemalta has the opportunity to expand abroad, develop market to the continent of europe and become a regional operator in europe."

joe mizzi hoped that through the mozura project, malta and china will conduct more cooperation and create more replicable management models in the future.

"when i see the big wind turbine rotate every day, i feel very proud. it provides a continuous supply of electric energy for my hometown. the rotating wind turbine brings hope," said zoran mirosevic, an engineer at mozura wind park. mozura project created nearly 500 local jobs in the construction period, most people stayed with the wind farm after the project completed, and zoran mirosevic is one of them. "thanks to the project, we received professional skills training, learned advanced technical concepts and gained friendship with chinese employees. i love this job."

"located at the junction of the silk road and the maritime silk road, montenegro is an important country along the belt and road. mozura wind power project has injected new vitality into montenegro's economic and social development, and it is also a seed of hope for the cooperation between the three countries to take root on the belt and road." said belan, national coordinator of montenegro's "16 1" cooperation mechanism.

"mozura project has a profound impact on the economic and social development of montenegro, and also has a significant influence on the balkan countries," said sheng baojie, ceo of sepm, "we have brought chinese manufacturing, chinese standards and chinese investment to europe, and win-win between the three countries is the foundation for our cooperation."

"this is a multi-win innovation model which benefits all parties involved, including malta, sep and montenegro," said joe mizzi, "we have received invitations to build renewable energy projects from many countries such as albania. mozura wind park has become an industry benchmark and demonstration project."