recently, a local newspaper in malta published an editorial, which praised d3 power plant for undertaking social responsibility actively and giving back to the local community, and encouraged the similar development mode of harmonious interaction between the enterprise and the community. the full text is translated as follows:

a successful model of win-win cooperation

when it was heard that the stacks of delimara power plant would be demolished, not everyone believed that would come true. since it was an election season then, some thought the new was nothing but an electoral tactic. a few years later, however, when the new delimara power plant was completed, the demolition project of the stacks commenced as scheduled. at present, the ugly stacks have been removed completely and disappeared in people's view forever, which truly become history.

we believe that in addition to removing the stacks, our marsaxlokk community has experienced more and better changes. the power generation process of the power plant has become more environment-friendly, which is not only relevant to the country's fulfillment of eu's 2020 commitments, but also has a lot to do with everyone living in and around marsaxlokk.

it turns out that d3 power plant has significantly reduced its emissions, and even far below the maximum level of power plant emissions set by the current government. the power plant also conducts real-time monitoring on major pollution indicators such as nox, sox, co and pm, with the related emissions decreasing evidently.

this is just one of the many positive influences brought by d3 power plant. the chinese investor not only provided a new value proposition for enemalta, but also established a new type of relationship between sep and marsaxlokk community different from that between other companies and communities. most often, when a large industrial project company operates in a scenic town like marsaxlokk, it is inevitable that there will be resistance and complaints because the local residents will naturally have a negative view of such a company.

but this is not the case in marsaxlokk. since the chinese enterprise aimed to assist the local community in marsaxlokk in the early stage of the project, this original intention based on cooperation has paid off. currently, all the local residents fully trust d3 power plant.

we believe such cooperation between chinese enterprise and marsaxlokk community is extremely important and also a good example worth learning. instead of ignoring the voices of the community, the enterprise has been actively engaging with the residents. they have a sense of responsibility for giving back to the local community, which is realized not only by running the power plant more efficiently, but also by organizing a variety of activities for the residents in the local community.

through holding cultural events from time to time in marsaxlokk, d3 power plant managed to give back to the community, and such a model of building bonds and trust between enterprises and residents is worth promoting. we hope this model could be used for reference by other companies, as many residents are still suffering from the industrial projects constructed by large enterprises in their communities. 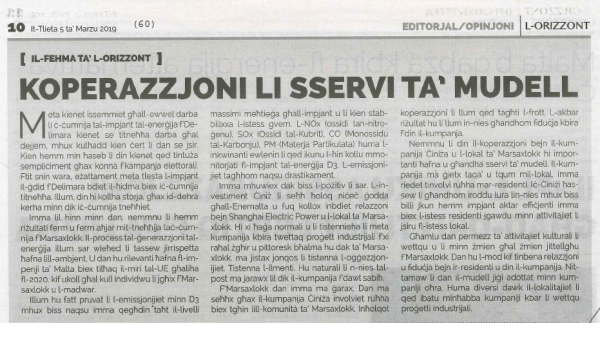