on the afternoon of july 21, 2020, a symposium on the 15th founding anniversary of tianji power plant was held at the conference hall. sep party secretary and chairman wang yundan and huaihe energy holding group (huaihe energy) party secretary and chairman kong xiangxi together with a delegation attended the symposium and conducted exchanges on the in-depth cooperation. sep party committee member and deputy president guo baohong and party committee and cfo chen wenhao participated in the symposium.

wang yundan pointed out that tianji power plant has been running for 15 years since its founding, with its business performance leading the industry all the way, creating social value while bringing good returns to the shareholders, whose results are hard-won. he said that huaihe energy and sep have maintained good cooperation, which is not only a capital innovation, but also an innovation of ideas and culture. in the past 15 years of cooperation, the two sides have been forging ahead with mutual integration, accommodation and improvement, and have maintained a healthy trend of operation and development. wang hoped that the two sides will make joint efforts to cooperate sincerely, carry forward the spirit of innovation, give play to each other's advantages and promote deeper cooperation and exchanges.
kong xiangxi expressed his warm congratulations on the 15th anniversary of the establishment of tianji power plant. he said that the system of huaihu coal power co., ltd. is a type of coal and electricity production cooperation system jointly innovated by huaihe energy and sep, which laid a foundation for realizing win-win development over the years. at present, the coal and power production joint venture  enjoys a sound momentum of development. he also hoped the two enterprises to further deepen cooperation, jointly promote the construction of key projects, and provide energy safeguard for the development of anhui province and the yangtze river delta region during the 14th five-year plan period. 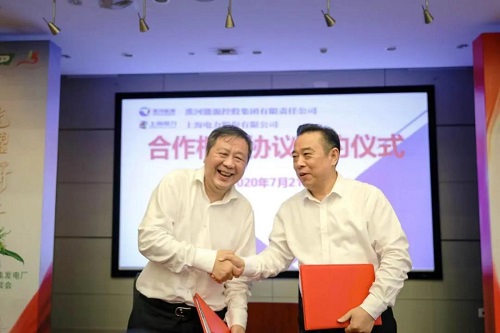 after the symposium, wang yundan and kong xiangxi signed the cooperation framework agreement on behalf of the two sides respectively.
the leaders of related departments of sep and huaihe energy, and leaders of huaihu coal power, tianji power plant and dingji coal mine joined in the meeting.